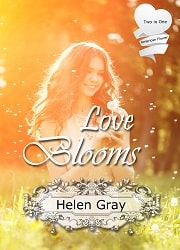 Bobbi Spencer, an engineer at Pasque Aviation, her father’s huge corporation, must determine what caused those planes to crash. Seeing grief nearly destroy her father after her mother’s death, and being pursued because of her wealth, has made her distrustful of men. While delivering a component to Caprice Airlines, she meets Shane, a handsome pilot, and enjoys spending some time in his company, but has no expectation of ever seeing him again. She leaves with her connection to Pasque undisclosed. Shane Price is fascinated with Bobbi the delivery girl, but he must get the European branch of Caprice Airlines on solid footing and help his widowed sister run the stateside division of their family business. When he learns Bobbi’s actual connection to Pasque Aviation, and she learns his to Caprice, they are both wary. Can they possibly have forever together?

Nurse practitioner Tara Landry had no choice but to quit her job and return to her small hometown in rural Maryland to care for her ailing parents, even though it broke her heart to break her engagement to Glen and leave him behind. When she needs to locate her cousin’s missing brother, she knows only person who is capable of the kind of help they need—her ex-fiancé. In spite of her conflicting feelings, she calls him. Glen Porter, Chief of Police of a town in another part of the state, is stunned—but pleased—when Tara contacts him. He agrees to look into the case, but then decides to go see her, hoping to find the missing cousin—and convince Tara that he still loves her. Does Tara’s niece, Susan, know something that will help them solve the case? Will working together convince them that is how they belong—together forever?